Thinking about Corn and Soybean Usage 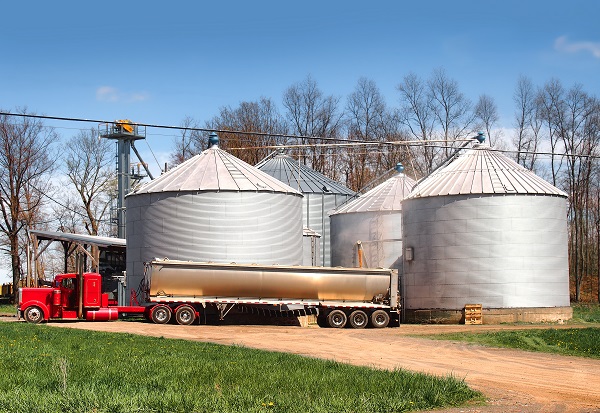 As we thought about what 2019 production might have in store, we realized we did not have a great handle on how corn and soybean usage varied from year to year. We knew usage was impacted by a variety of factors – such as demand by different end-users and price- and that usage has trended higher over time (here, here), we just had not dug into the data much. Specifically, we did not know what a big annual change in usage might be. For this week’s post, we reviewed annual corn and soybean usage data.

Figure 1 shows annual U.S. corn usage from the 2000/2001 marketing year through the current year. As with production, a linear trend line fits the data quite well. Over this period, annual usage has increased at an average annual rate of 288 million bushels per year. This annual increase equals 2% of 2018/2019 usage levels. Starting at just under 10 billion bushels corn usage underwent a rather rapid increase from 2000/01 to roughly 2007/08.  Since then it has been above 12 billion bushels except for the drought (and high price) year of 2012/13.  Since 2016/17 it has exceeded 14 billion bushels. 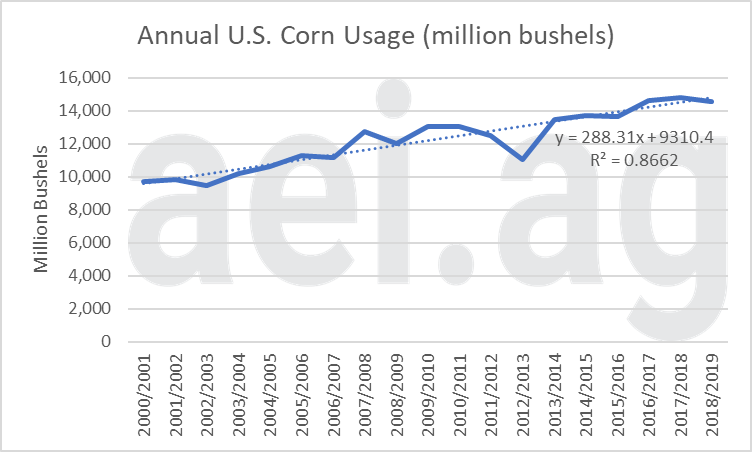 Figure 2 shows these data for soybean usage. The overall upward trends are similar for corn and soybeans. The linear trend line for soybeans is also a good fit but, compared the corn, accounts for a slightly smaller share of the total variation (R-squared of 0.82 for soybeans compared to 0.87 for corn).

Over the time series, usage has increased at an average annual rate of 84.9 million bushels per year. This annual rate of increase is equal to 2.1% of 2018/2019 usage. 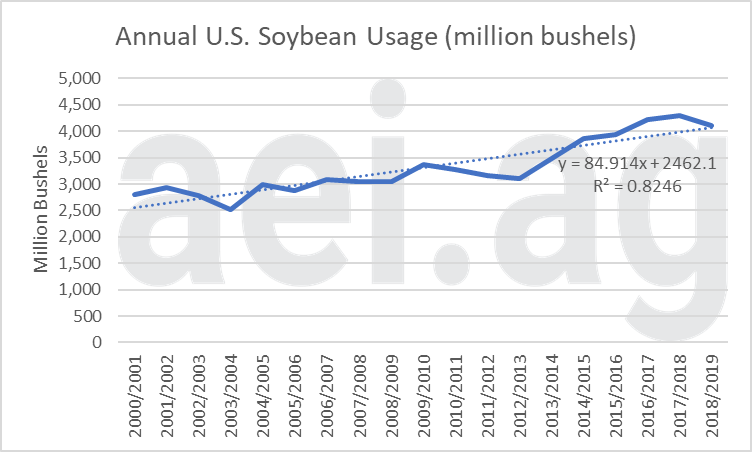 Given the data trends and how well the trend line fit (high R-squared values), this left us to think about usage similarly to how we think about yields. Specifically, we can use the forecasted trend value for 2019 as a starting point, then consider historical variations to understand the range of possible outcomes for 2019.

In figure 3, the annual error – or difference between the trend line estimate and what was observed- for corn usage is shown, ranked from lowest to highest. As one would expect the years when usage falls tends to correspond to years when yields are low and prices high.  For instance, in 2012 usage was 15% below expectations and in 2002 usage was 7% below trend. On the other hand, 2007 (+10%) and 2009 (+7%) were years when usage exceeded trend substantially.  In most other years, usage fell quite close to trend. 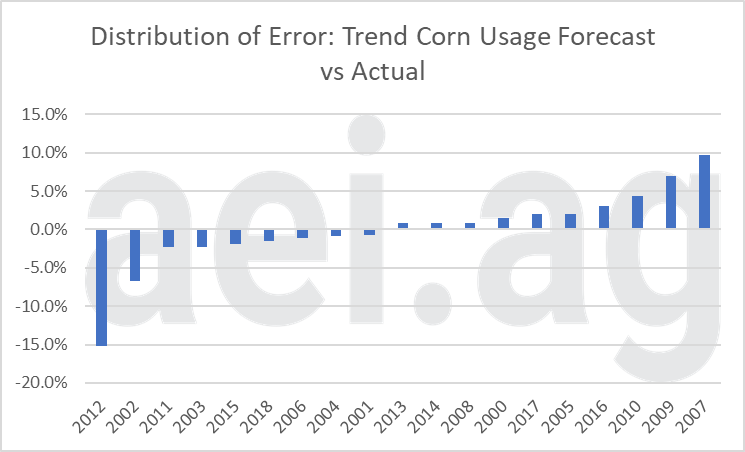 Similarly, figure 4 shows the distribution of error for soybeans. Again, low yield years (when price has to ration demand) corresponded with years where the actual was less than the trend line.

Perhaps most interesting is how much more variation – or error- there has been for soybean usage. Consider, again, the years with errors of +/- 5%. In 8 years – or 42% of the time-  usage varied by more than 5%; four years great than 5% and four years less than -5%. Outside of the trade uncertainties of recent years, soybean usage has been more vulnerable to year-to-year changes when compared to corn. 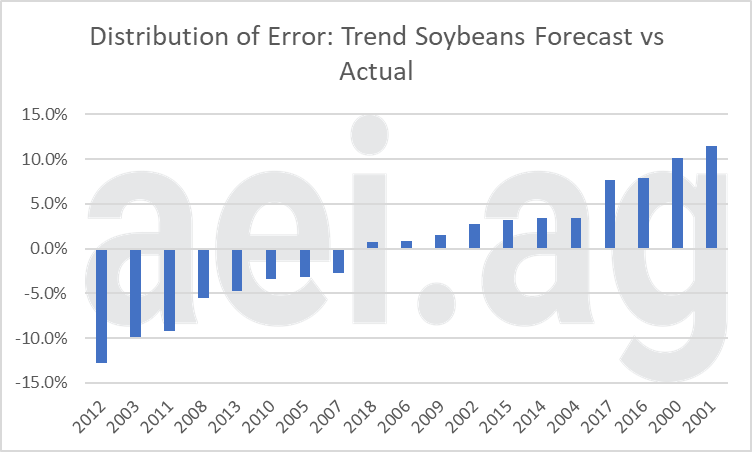 One of the most important factors in usage of these crops are exports.  U.S. soybean usage has consistently been driven higher by increasing exports – with China being the major contributor.  On the other hand, corn exports account for a much smaller share of corn usage and have remained relatively stagnant as a share of usage.

This can be seen in Figure 5 where exports as a percent of use for corn (blue) and soybeans (orange) have trended in different directions for the last 20 years.  While corn exports started the period at 20% of consumption, they ended at 16%.  Soybeans started at 36% of consumption and ended at 46%. 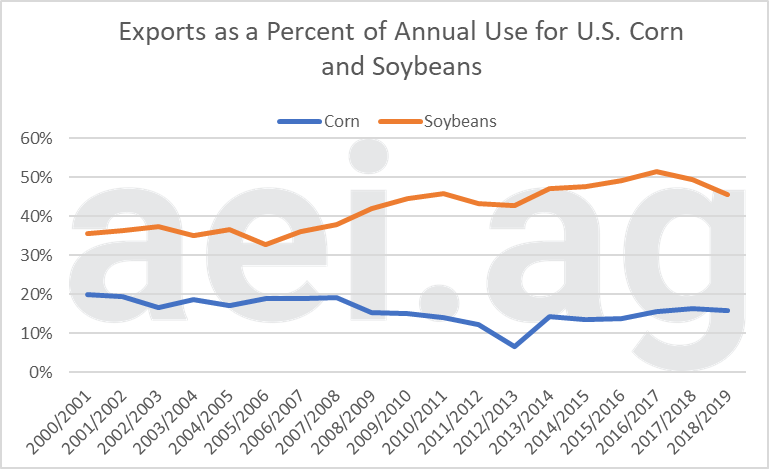 While we have focused a lot on trying to understand the variation of annual yields (2018 Yield Guides here, here, and here), we have not spent much time focused on corn and soybean usage. When looking at the annual data over time, it was surprising how much of the year-to-year variations were explained by a simple trend line.

The trend line is a helpful starting point for thinking about 2019/2020 usage and suggest usage of 15.1 billion for corn and 4.2 billion for soybeans. For reference, these estimates are quite a bit higher than current 2018/2019 expectations for corn (14.6 billion); and only slightly higher than soybeans expectations (4.1 billion). Again, these are simply starting points.

When one considers the errors between the trend line and actual, another layer of insights emerges. First, the error for corn usage – between the trend line forecast and actual- was +/- 5% 21% of the time.  This level of error was more common for soybeans, 42% of observations. This is to say that usage is more variable for soybeans than corn, even before the trade war uncertainties since 2018.  Further, soybeans are significantly more reliant on exports for usage.

The linear trend lines – while admittedly simple- provide many insights into corn and soybean usage. Like any estimate or forecast, this process has limitations. That said, this is a simple starting point for thinking about potential levels and variations from the mean.