Starting each May, the USDA includes its estimate of the market year average price for a variety of crops.  Having never paid much attention to this estimate, I began to wonder how accurate they were and if these estimates could help inform farm planning, budgeting, and marketing.  In our experience, one of the most difficult things people struggle with in planning for the crop year is establishing a reasonable price baseline.  Since this price is provided in the WASDE report, we thought it would be useful to see if it provided a useful context within which to evaluate different price levels.  This week we take a look at how the May estimates in the WASDE report have compared to the historical market year average prices for corn and soybeans.

Note that we only considered the May WASDE estimates although these estimates are updated each subsequent month throughout the marketing year.  Interested readers can find a thorough statistical analysis of the May and subsequent WASDE estimates in this research article.  We will use a simpler comparison approach in this article although the conclusions we will draw will generally be consistent with the more comprehensive analysis.

Further, it is important to point out that forecasting the final MYA price in May is a tough challenge.  In large part, these estimates are being made before all of the crop is even planted.  This makes the estimates prone to being wrong in any year in which yields do not come in near trend levels.  Further, there is also considerable demand uncertainty that must be accounted for.  All this is to say that forecasting final prices in May is not easy.  Still, let’s take a look and see how well these forecasts have performed.

Figure 1 shows the midpoint of the price range given in the WASDE (starting this year USDA will only provide the point estimate) and the final MYA price for corn while Figure 2 shows the results for soybeans.  The WASDE estimates are shown in blue while the MYA prices are shown in red.

A general inspection of the graphs highlights a few key features.  First, there are a few years where the May estimate was substantially different from the final MYA price. One year that immediately stands out is 2012.  In that year, corn yields were over 30 bushels short of trend, creating a major supply shock. However, the low yields in 2012 were preceded by below trend yields in 2010 and 2011 as well.  From 2005 – 2007 the WASDE estimates were consistently low.  These years were characterized by strong yields and rapid demand growth.  Although there are clearly some misses, the WASDE estimate was also quite good in several years. 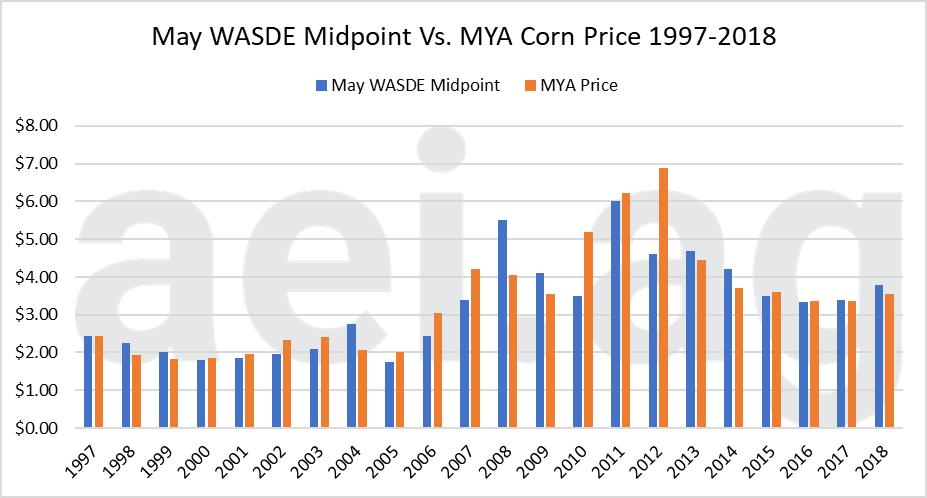 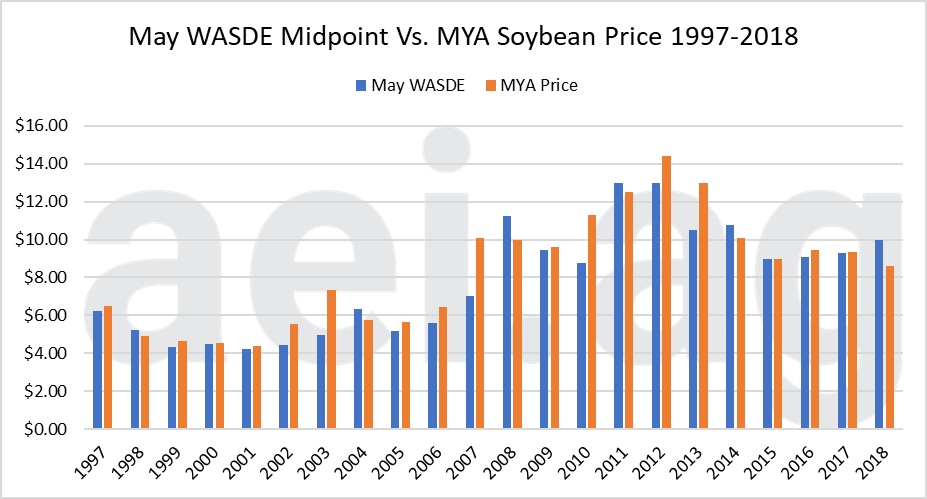 A quick inspection of figures 1 and 2 can be a bit misleading due to the impact of the differing vertical axis scales of the graphs.  We also computed the percent error associated with the WASDE estimates compared to the final MYA prices.  Figure 3 shows the percent errors for corn in blue and soybeans in red. It is perhaps a bit easier to interpret the relative performance of the WASDE estimates from this figure. 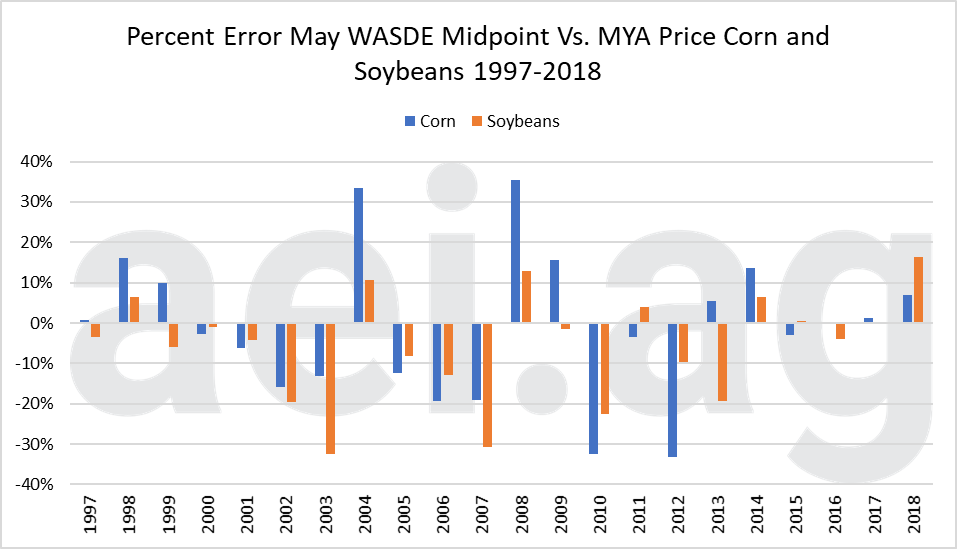 The USDA will soon be releasing its May estimate of the MYA price for both corn and soybeans.  The above analysis indicates that these estimates are far from perfect predictors of the final market year average prices.  However, it also indicates that these prices should be given some consideration.  Given the significant amount of production uncertainty that exists from May to harvest and demand uncertainty that exists from harvest to the end of the marketing year, we were somewhat surprised by how well the WASDE point estimates performed.

Economic decisions are always complicated by uncertainty.  Still, we must find ways to make decisions and move forward.  The WASDE estimates are one piece of information that people may consider using to make decisions.  As always it is important to consider how the economic and production environment is changing when making decisions.