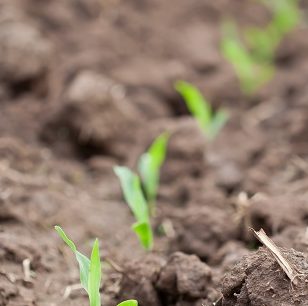 With 2019 planting season underway – at least by the calendar – the focus will soon shift to yields and production. In fact, the May USDA WASDE report will be an important starting point for 2019/2020 discussion. While it is still early, this week’s post reviews the current corn ending stocks situation and considers possible scenarios for 2019/2020. 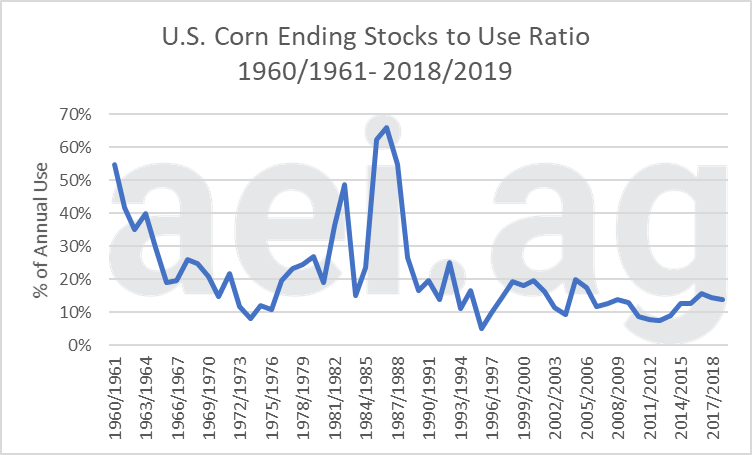 As we have noted in previous posts about ending stocks, how bad the current situation seems is often impacted by 1.) how much one remembers, 2.) how much data one considers, and 3.) or how far back the graphs are drawn. 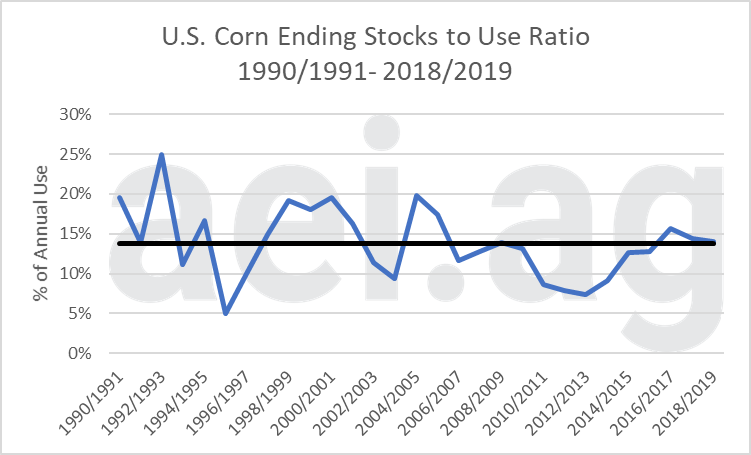 Thinking about the crop being planting now, the 2019/2020 marketing year, what are the possible outcomes? Again, it is early in the growing season, and numerous uncertainties remain; including final acres and prevented plantings. That said, there is an opportunity to frame-up the uncertainty.

The first uncertainty is around production – acres and yields. For this part, we used the USDA’s March Prospective Plantings report (which assumed a more historically normal prevented planting level) as well as an average for the share of harvested acres. Furthermore, we assumed a baseline yield of 176 bushels per acre, which is in line with what USDA has as its first 2019 yield. For variability in production, we considered yields at the 25th and 75th percentile[1]. Of course, many production uncertainties exist between now and harvest; we, however, only show variation from yields.

At one level, these estimates are not surprising: higher yields result in higher stock; higher usage equals lower stocks. With usage approach 15.1 billion – again, about 0.5 billion bushels above 2018/2019 usage- and yields around the baseline of 176, ending stocks could turn lower, compared to 2018/2019 levels. This would be helpful news.

The shortcoming and challenge with this back-of-the-envelope process are that price impacts are not directly considered. This is especially true if stocks turned lower. We would expect prices to ration demand if the stocks to use ratio fell below 10% – limiting usage and the decline in stocks. 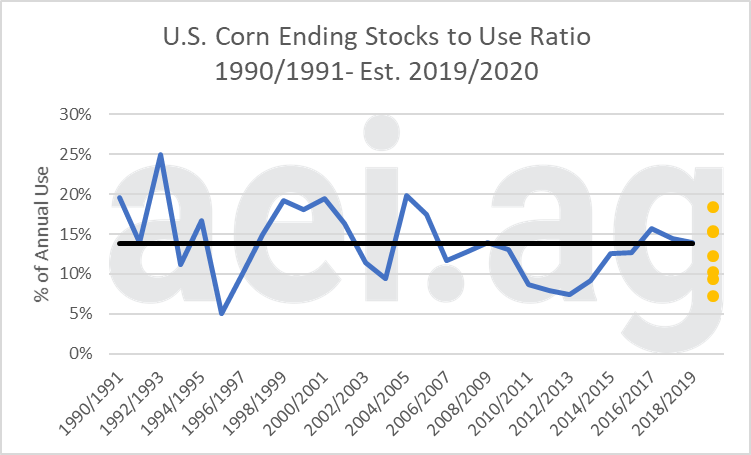 As we travel around, the theme of big crops, big yields, and big ending stocks seem to be weighing heavily on everyone mind. This has undoubtedly been the story for corn in recent years. Compounding the gloom is the expectation of higher corn acreage in 2019.

When thinking about stocks, it is always important to consider the stocks-to-use ratio. Additionally, it is helpful to consider multiple years of data. While corn’s stock-to-use ration at some of the highest levels in recent years, it is important to recognize 2018/2019 levels are in line with the 29-year average. Furthermore, stock ratios have turned lower in recent years.

Thinking about 2019, the usage story will be key. The scenarios with low usage resulted in ending stocks turning higher in 2019/2020. Low usage would be a bleak outcome and highlights the concerns many have surrounding trade uncertainties.

For 2019, important corn benchmark numbers will be national yields of 176 bushels and usage of 15.1 billion bushels.

[1] Consistent with the USDA, yield data from 1988 were detrended for this.