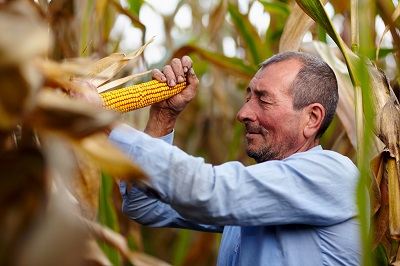 After five back-to-back years of above-trend corn and soybean yields, 2019 seem positioned to experience below-trend conditions. Lower-than-expected yields come after a cold, wet spring also created significant prevented planting conditions. At this point, however, the magnitude of production hiccups – yields and acreage- are unknown. This week’s post – the 2019 corn yield guide- is a starting point for benchmarking 2019 corn yield projections.

Figure 1 is a graph of U.S. average corn yields from 1960 to 2018. Yields over this timeframe – shown by the trend line- have increased at an average annual rate of 1.87 bushels per acres. This upward trend in corn yields over time- thanks to a whole host of technological improvements- makes it challenging to compare reported yields from year to year, even over a short timeframe. In just five years, the upward trend in yields is equal to 9.35 bushels (5*1.87).

The data from Figure 1 is also shown in Table 1. The table format makes it easier for those interesting in looking at the specifics. The first thing many will notice is the five-year run of above-trend yields in recent years. This is something only seen previously in the late 1960s.

Using this data method (detrending yield since 1960), you would find that the trend average yield for 2019 is 171.6 bushels per acre.

The USDA has made two corn yield estimates for 2019. The first projection was 176.4 bushels per acre and assumed normal spring planting conditions – which 2019 did not turn out to have. In the more recent WASDE reports, June and July, the USDA used a lower yield projection of 166 bushels per acres. Even this latest forecast begs the questions: how does a 166 bpa yield measure up in 2019 terms?

Table 2 attempts to provide historical context to current yields projections. Specifically, the departure from trend data in Table 1 has been ranked from lowest to highest. Then, each year’s departure from trend has been added to the above-discussed trend average yield of 171.6. This creates a 2019 yield benchmark.

In the middle of Table 2 is a dark black line. This denotes the 50th percentile – or where half of the observations fall above or below. Note that above-trend yields occur more than half of the time (about 61% to be precise). Second, if you search the right-column for 166, you’ll end up around 1964 and the departure from the trend of -5.8bpa. Historically speaking, a final 2019 yield of 166 would be the 14th lowest departure from trend in 60 years, of the 23rd percentile.

The goal here is not to provide a yield forecast, but to provide help provide context to any yield forecasts that might be thrown out. Using yield data since 1960, the current USDA projection of 166 is yield at the 23rd percentile. As one thinks about yield below that number, it is worth considering how historically significant such a yield might be. Again, none of this is to say how plausible any yield forecast is; it is merely to help provide context to how such yields fit into historical context.

Are Low Yields Catching Up?

Every so often we hear a version of the argument that low yields are not possible anymore given improvements in technology. The idea is that genetic improvements have made significant strides, especially on the bottom-end, and, therefore, a year like 2012 would not have 2012-like yield impacts. More specifically, if 2012 yields are detrended to 134 in 2019, the argument is that 2012 weather would have yields well above 134 given the significant improvements over the last few years.

During the cold, wet, and late planting of 2019, we heard the “the bad isn’t as bad as it uses to be” argument surface again. This line of thinking, which was even included in some ag media stories, got us to wondering what the data might suggest.

To think about this, we considered the data in Table 2 and created three categories based on yield departures from trend – the lowest 25% yields, the middle 50%, and the highest 25%. Once each year was categorized into a group, a trend line was calculated from posted yields (USDA reported yields) for the highest and lowest yield groups (Figure 2).

Admittedly, one could argue that this methodology is a bit simple. That said, these data and method do not support the ideas that the lowest yields are catching up faster and limiting the downside yield risk in trend-adjusted terms. While this topic area deserves more research, one might, however, conclude from Figure 2 that low-end corn yields are increasing at a slower rate over time and, in turn, the downside risk for yields in any given yield could be understated.

As we approach the time of year where yield estimates and forecasts get thrown around a lot, it’s important to keep in mind the context of those yields.

First of all, yields since 1960 have increased at an average annual rate of 1.87 bushels per year. This makes it necessary to detrend yields to make historical comparisons.

When thinking about the USDA’s current 2019 yield forecast of 166 bushels per acre, it’s worth considering that this yield is at the 23rd percentile of historical yields. Said differently, using only this information, one might have forecasted (in early 2019) the probability of a 2019 U.S. corn yield at 166 bushels or lower at 23%. Again, this is not to say anything about the quality of the forecast, but to note and benchmark where those current yields rank in a historical context.

Finally, we heard many comments this spring about how technological improvements have made big strides to move low-end yields up. When comparing the trend lines for the lowest 25% to the highest 25%, it’s hard to argue the low-end yields are catching up. In fact, one could even make the argument that they have been falling behind, and down-side risk has been underappreciated.