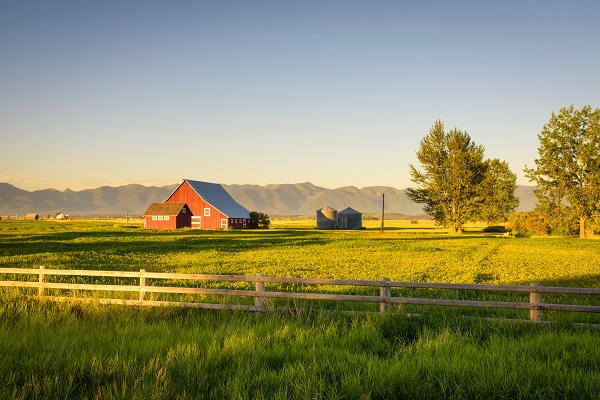 Last week the USDA released its latest estimates of U.S. net farm income. This report left many scratching their heads as the outlook for 2019 significantly improved since the initial March estimate. Specifically, the current estimate of $88 billion in net farm income for 2019 is much higher than the March estimate of $69 billion. This week’s post digs into the details and considers how the changes came to be.

Figure 1 shows real, or inflation-adjusted, U.S. net farm income (2019=100) going back to 1929.  This is a long data-series but helps to provide context. For example, the orange line is the 91-year average of $84.8 billion. It is common for the U.S. farm economy to spend several years near, or slightly below, this level. For example, income was regularly around these levels around the 1960s and 1990s. The black lines represent one standard deviation above and below the means (+/- $26.7 billion). Data points above/below this range represent historically higher/low levels.

The current 2019 estimate of sector income is $88 billion. This level represents a strong recovery since farm income fell to less than $66 billion in 2016.

While the change in estimated 2019 net farm income was most evident, it’s the changes in the 2018 forecast that tell most of the story.

The USDA has a long window for making forecasts and estimates of net farm income. Specifically, for each year there are five releases over 19 months. This long time frame is why the 2018 forecast was adjusted in August 2019. Since the March report, the USDA was able to incorporate expense data gathered by the ARMS survey. For those interested, an explanation of the details can be found here.

Figure 2 shows an overview of changes to estimated 2018 net farm income between March 2019 and August 2019. In March, the USDA estimated 2018 farm income at $64 billion. The latest estimate for 2018 is nearly $86 billion. What drove the improvement? The two largest categories were lower production costs ($8.7 billion improvement) and a decrease in capital consumption ($6.5 billion improvement). Both of these categories contributed to a positive increase in farm income. The third category, “other,” was mostly made up of decreases in labor and rent expenses paid.

Figure 3 shows the same type of information for the 2019 estimates. At a high level, net farm income improved nearly $19 billion, or a 27% increase. For 2019, there were some improvements and setbacks. First, lower values of crop and livestock production negatively contributed to the outlook. Across the board, the USDA is expecting a lower value of agriculture production in 2019[1].

Again, the largest sources of improvement have been the lower cost structure; lower production expenses, decrease in capital consumption, and the other category. Keep in mind there is carry-through between Figures 2 and 3. For example, the USDA finding producers spent less on labor compensation in 2018 directly impacts 2018 (figure 2) but also carries into 2019 as the cost structure has decreased. In other words, the lower costs structure observed for 2018 creates positive benefits in future years.

For producers, the declines in the value of production from crops and livestock are particularly frustrating and front-of-mind. For many, this decline translates into lower than budgeted revenue projections.

Forecasting and estimating net farm income is hard. For example, in early March the USDA released the first 2019 forecast, before the planting intentions report. A lot has changed since then, and it’s only August. This is to say that much can – and does- change over the USDA’s forecast time frame. Figure 4 shows the range of how much USDA forecasts can change over time. The vertical line shows the spread between the highest and lowest forecast made. The black dot shows the final forecast. Since 2000, the average range between the lowest and highest forecast is $18.5 billion.

Again, the purpose of showing Figure 4 is to highlight how much variation can occur for a single net farm income estimate.

As the Margin Squeeze began, we pointed out there were three ways of meaningfully improving the farm economy; 1) variable costs moderate, 2) fixed costs decline, and/or 3) output prices improve. The latest net farm income data shows that improvements have come primarily from a lower cost structure.

A fourth factor has been at play since 2018; MFP payments. These ad-hoc payments have been a significant contributor to the farm outlook. In 2019, total MFP payments, from the 2018 and 2019 program, account for more than $10 billion, a substantial share of net farm income.

While there have been improvements to the farm economy in the form of a lower costs structure- something we will look at in more detail in future posts- it is important to keep in mind a significant portion of the farm economy has been propped up by MFP payments. One on hand, it’s good to see net farm income has broken out of the $60-$70 billion range we seemed stuck in. However, we now have to wonder how the farm economy will eventually transition off MFP payments. Will it be gradual, or abrupt? Will a decline in MFP payment be offset with higher commodity prices?

The improved cost structure and recent MFP payments lead to higher net farm income and a more favorable farm economy outlook. While this is a welcome improvement, this is also not a time to get comfortable or declare the worst is behind us. The improvements are not sustainable, and many questions linger as 2020 comes into focus.

[1] Value of ag production for 2019 fell from $430 billion in March to $415 billion in August. These estimates include commodity insurance indemnities, which have been forecasted higher in the latest data.