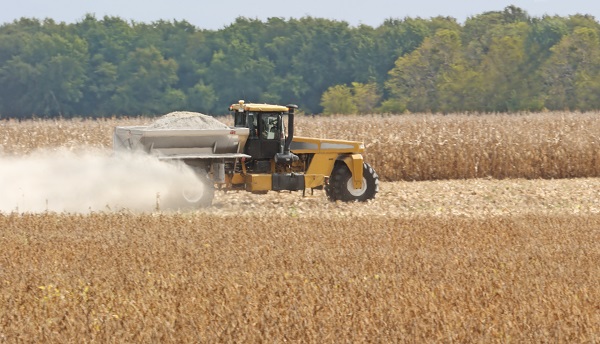 Fertilizer prices dramatically increased last Spring. After anhydrous ammonia spent most of 2018 around $500 per ton, prices jumped to more than $600 per ton in early 2019. Prices remained mostly unchanged until late summer. This week’s post reviews the latest fertilizer price data.

Figure 1 shows the average prices of anhydrous ammonia, DAP, and potash in Illinois, as reported by the USDA, since January 2015. Fertilizer prices have fallen from their highs during the farm economy boom. Since 2015, anhydrous ammonia prices have ranged from a higher of more than $700 per ton to a low of $400 per ton.

In recent weeks, fertilizer prices have sharply declined. Compared to prices last spring -the average of prices reported in April and May- anhydrous ammonia prices are down 22% and DAP 17% lower. Potash prices have also declined (-5%).

Of course, not all nitrogen prices are equal. Figure 2 shows the reported prices for anhydrous ammonia, urea, and liquid 28%. Over time, they have followed a similar price trend, and all three products have seen prices fall from spring highs. That said, anhydrous ammonia prices have fallen the most (-22%), while urea (-8%) and liquid 28% (-10%) have seen smaller adjustments.

For producers with the ability to use alternative sources of nitrogen fertilizer, it is important to keep the relationship of nitrogen prices in mind. More specifically, the sharp price decline in anhydrous ammonia warrants a look at relative prices. Figure 3, which considers the price per pound of nitrogen applied, shows the prices of urea and liquid 28% relative to anhydrous ammonia.

The price relationship for liquid 28% (in red) has also jumped in recent weeks. In September, the price ratio was 1.54, above the long-run average of 1.36.

Two caveats are worth noting. First, the relative prices shown in Figure 3 only consider the price of the product. Other factors – such as application costs, timeliness, logistics, etc. – also impact producers’ decisions on which source to use.

As producers planned to expand corn acreage in 2019, fertilizer prices soared to the highest levels since 2015. In recent weeks, however, prices have moderated as the expense of a 180-70-70 rate has fallen more than $20 per ace.

Producers should also consider the relative cost of various nitrogen sources. As a result of anhydrous ammonia prices falling sharply in recent weeks, urea and 28% prices are historically high relatively to anhydrous.

As 2020 comes into focus, fertilizer will likely be a great source of uncertainty and variability in crop budgets. Will fertilizer prices go higher, again, at the prospects of even larger 2020 corn acreage? Will anhydrous prices in Illinois again jump above an average of $600 per ton?