A Closer Look at the U.S. Bacon Situation 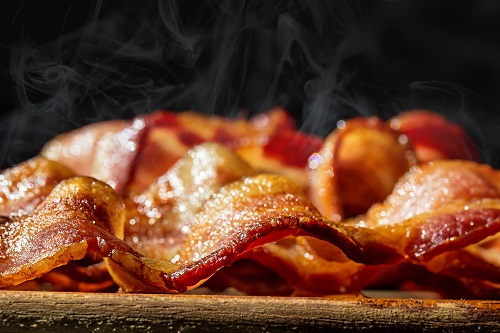 In recent weeks there have been stories circulated about large U.S. inventories of bacon. Specifically, it was noted that frozen inventories were at 40-years highs.  This caught our attention as it seemed the U.S. was running out of bacon (as inventories reached 50-year lows) just a few years ago. What is going on? This week’s post is a closer look at the U.S. bacon and pork situation.

Figure 1 also captures an uptick in the variability of September stocks in recent years. Before 2009, September inventories were typically between 10 and 20 million pounds. However, stocks in 2009 exceeded 38 million pounds – a noteworthy high at the time. This was followed by a sharp contraction in 2010 (4.8 million lbs.) and 2011 (9.3 million lbs.). The whiplash continued as stocks again swelled in 2014 (34 million lbs.) before falling in 2015 (10.9 million lbs.).

While the large September 2019 stocks are significant, perhaps the most significant insights from the data are that 1) frozen stocks of pork bellies have been highly volatile over the last 10+ years and 2) the large swings – from highs to lows – can occur in a short time period.

Digging into the data revealed the USDA reports frozen pork belly stocks every month. The most recent headlines were generated using the September data. The “running-out” story in early 2017 was based on December data.

Figure 2 shows the average monthly stock of frozen pork bellies since 2000. These data give us an idea about the seasonality of frozen stocks. It turns out that frozen stocks vary significantly throughout the year. On average, inventories reach lows in September before trending higher throughout the winter, peaking in April.

The range of the seasonality is also worth noting. During the late-summer lows, pork belly stocks fall to 20 million pounds. By early spring, seasonal inventories nearly tripled to more than 60 million pounds between March and May.

The bacon and pork belly situation captures only one component of the overall pork market. What is going on with pork more broadly? Figure 3 shows annual U.S. pork stocks measured as the ending stocks to use ratio[1]. This ratio is helpful as it provides context to an otherwise upward trend in U.S. pork production.

Furthermore, frozen pork belly stocks have been volatile in recent years. For example, over the last decade stocks have reached historically high levels before sharply contracting toward historically low levels. These swings can also occur quickly – sometimes from one year to the next. This begins to explain how media articles about “running out” of bacon can quickly be replaced with stories of “burdensome supplies” in just a few years. Moving forward, don’t be surprised to see more of such stories in the future.

Finally, while frozen pork belly stocks appear historically high, overall pork stocks- when measured relative to usage- ended 2018 below the historical average. Stocks since 2016 have not only been below the historical average but also below levels observed since the late 1990s. When thinking about the U.S. pork situation as it pertains to a potential Trade Deal with China, the overall tight U.S. pork stock situation will be important to keep in mind. Admittedly any increased trade with China will come down to specific pork cuts and products, but the overall situation has been toward lower-than-normal U.S. stocks in recent years.

[1] For the ending stocks to use ratio, a measure of “use” was derived by adding annual reported exports and disappearances.

Getting a Handle on Equipment Costs