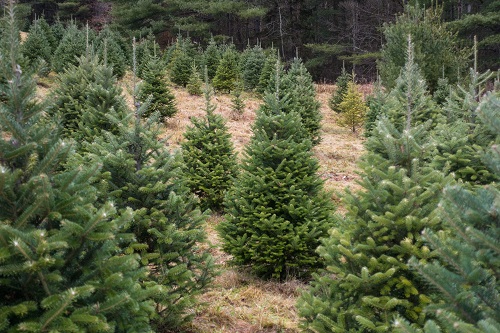 A recent article pointed to the Great Recession as a key reason for fewer trees.

Not shown in Figure 2 are changes in the number of farms by farm size. Over the past 15 years, all size categories have reported declines. However, the smallest farms, those with 1 to 2.9 acres of production, were the least impacted by declining numbers. Specifically, these producers represent a larger share of total farms in 2017 (20%) compared to just 15 years ago (17%).

Many of us are familiar with the 80/20 principle – where a large share of activity (80%) comes from a much smaller share of effort (20%). Applying this to Christmas trees, we’d expect a majority of Christmas tree production to come from a small group of large-scale producers.

Shown in blue is the share of total 2017 Christmas tree production the size categories account for. While a majority of operations are small acreage, these operations account for a tiny share of production. For instance, a majority of producers (57%) have fewer than 10 acres, but the group only produced 5% of the total tree harvested. On the other hand, the largest operations, those with 50 or more acres, accounting for only 11% of operations, but 77% of total production – 77/11. Most impressive, the USDA reported in 2017 that the 434 largest farms raised 64% of all trees raised in the U.S. Those largest farms- the 434 with more than 100 acres of production- harvested an average of 22,000 trees each.

Wishing you and yours the happiest holiday season!

The 2019 Agricultural Year in Review