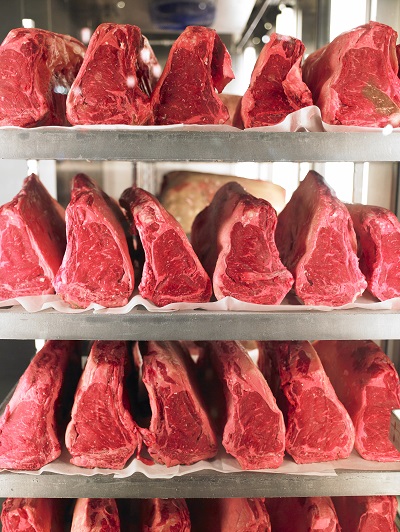 In earlier posts, we have looked at the growing role of trade in global and U.S. crop production. The trends are mixed at the crop-level, but across all major crops, global trade has clearly become more significant over the last decade. This left us wondering about the livestock sector. This week’s post considers the impact of trade in the U.S. for beef, chicken, and pork.

Before jumping in, a couple of notes about the data. First, the data used for this post were reported by the USDA’s FAS PS&D database.

Second, the data presented are net exports as a share of total U.S. production. Net exports were calculated by taking exports minus imports. Positive values indicate that exports were larger than imports; negative values occurs when imports are larger than exports. Net exports, rather than just exports alone, are important as some meats have significant imports. For example, imports were equal to 11% of beef production and 3.5% of pork production in 2019. Imports are much less significant for chicken, 0.3% of production.

Finally, net exports were reported as a share of production to provide context. This is important as production has increased across the 60-years of data considered.

Figure 1 shows the role of trade in U.S. beef & veal. Before 1990, net exports of beef & veal were negative, with the magnitude equal to -4% to -8% of production. Beginning around 1990, a trend towards more exports began. By the early 2000s, net exports were still negative, but the magnitude (-2% of production) was smaller. Net exports plummeted in 2004 after the December 2003 confirmed case of BSE, which shut the U.S. out of many important export markets.

While it can be tempting to look at the recent data and focus on net exports being positive or negative, it’s essential not to lose sight of the bigger picture. Over the last three decades, a rapid shift towards more exports has been underway.

Figure 2 shows U.S. chicken net exports as a share of production. The USDA first started reporting these data in 1999. Overall, the U.S. imports very little chicken, as noted above, and net exports have been equal to 15% to 20% of U.S. production. For a reference point, the USDA estimates corn exports to equal 13% of production for the 2019/2020 marketing year.

Over the last three decades, a structural shift towards more exports of beef and pork has been underway. Before the 1990s, the U.S. imported more beef and pork than it exported. Since 1990, however, net exports as a share of production has trended higher.

While the trend has been towards more exports, the magnitudes vary. In beef & veal, 2020 net exports are estimated at +2% of production. For chicken (+16%) and pork (+22), net exports account for a much larger share of production.

It is no secret that trade can be an important source of growth for a sector. For example, in an earlier post, we noted that beef consumption in the U.S. has been extremely lackluster (0.2% annually between 1990 and 2016).

Looking ahead, trade is at the front of everyone’s mind. This is especially the case as U.S. livestock producers hope for even more exports in light of China’s African Swine Flu (ASF) challenges.

A look at global meat export trends can be found here.

Is the World More Reliant on Meat…