Is the World More Reliant on Meat Trade? 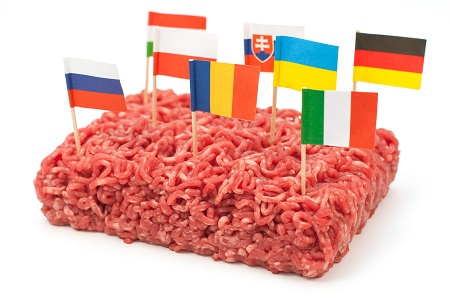 Last week’s post looked at the expanding impact of trade in U.S. meat, especially beef and pork. As a follow-up, this week’s post considers the trends in world trade of beef, chicken, and pork. Is the world more reliant on meat trade?

Figure 1 shows the annual world exports of beef & veal as a share of production. This measure is helpful as it captures the share of global production reliant on trade.

A quick glance shows the trend has been upward of the past 60 years. During the 1960s, less than 10% of total global beef & veal production was tied to exports. Most recently, however, nearly 20% of production is reliant on exports.

Since 2000, chicken exports – measured in metric tons of product (not shown in Figure 2)- have increased at a 4.7% average annualized rate.

Figure 3 shows the world trade of pork. Like the other meats, the pork trend is also upward over the last 6 decades. After a significant drop in exports in the early 1990s, the upward trend has been striking. In 2019, total pork exports accounted for 9% of production. For 2020, exports are forecasted at nearly 11% of production.

With all eyes on trade and African Swine Fever (ASF), it’s worth noting the trend towards more global trade – for both meat and grain – has been underway for decades. That said, the Phase 1 trade agreement and spread of ASF could push meat exports even higher in 2020, and beyond.

Second, the rate of growth in tons of product exported has also varied. Physical exports of pork have increased at a much faster rate than compared to beef and chicken.