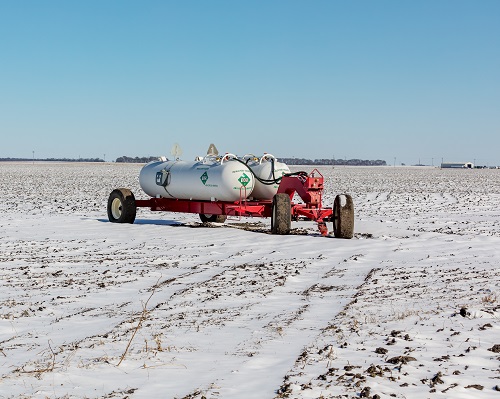 U.S. producers are positioned to plant the second-largest corn crop in modern history, but you wouldn’t notice by glancing at fertilizer prices. In the week’s post, we review 2020 fertilizer prices and the trend of lower prices.

As producers updated their 2020 crop budget, low fertilizer prices were a welcomed improvement. As shown in figure 1, fertilizer prices reported out of Illinois in March 2020 were significantly lower than in Spring 2019. Anhydrous ammonia prices, for example, are currently around $500 per ton, but were closer to $600 per ton last year.

Across the board, lowered fertilizer prices are observed. DAP prices have fallen the most, down 22% (Figure 2). All forms of nitrogen fertilizers were at least 10% lower.

Looking at the data over a longer time frame, figure 3 shows the prices of anhydrous ammonia, DAP, and potash since January 2010. In most cases, fertilizer prices are at or near their lowest levels in more than a decade. Anhydrous ammonia, which peaked at nearly $900 per ton in 2013, has spent considerable time in recent years around the current levels ($500 per ton). Only briefly, in late 2017, did prices fall to $400 per ton.

More broadly, 2020 will likely be the lowest corn fertilizer expense in more than 10 years. Previously, the low of $97 per acre was observed in 2017. The last time the U.S. planted more than 95 million acres of corn was in 2012 and 2013. That was when fertilizer expense was nearly $160 per acre. Of course, many factors have changed since 2012 and 2013; expanded U.S. fertilizer production and lower energy prices being key. Furthermore, corn production in 2012 and 2013 was being pulled by strong usage and higher prices (here and here).

With fieldwork and spring planting getting underway, lower fertilizer prices are a welcome improvement. For a fertilizer application of 180-70-70, lower prices equate to a $20 per acre savings over spring 2019 prices. Furthermore, current prices reflect the lowest fertilizer expense observed in more than a decade. Lower fertilizer expenses for corn production also limited soybeans’ appeal in 2020.

A lot of bizarre things have and will occur in 2020. One of them will be the perspective of a 97 million-acre corn crop – one of the largest in modern history- with some of the lowest fertilizer prices in a decade.

2020 Crop Insurance Guarantees About Even for…