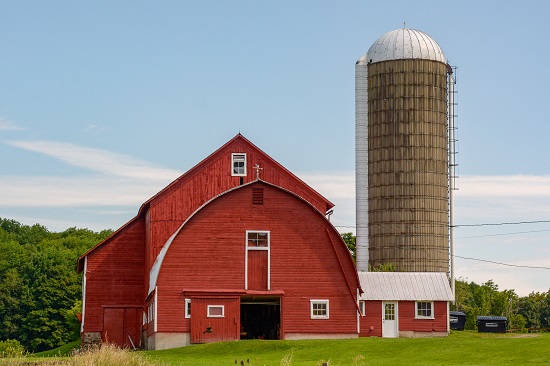 The last month has been one of the most difficult times in modern economic history.  Economic activity around the world has run into the brick wall of the global COVID-19 pandemic.  Few sectors of the economy have been spared.  Agriculture is no different.  We thought it would be useful to take a look at the declines in commodity prices that have occurred this year.

In Table 1 we show the change in commodity prices for corn, soybeans, wheat, cotton, live cattle, and lean hogs.  The calculations were based upon futures market contracts, with the specific delivery month shown in the second column of the table.  We made the calculations based upon the average price over the first 2 weeks of April and compared them against the same time period one year ago and the average price during the month of January 2020.

Wheat is the only commodity in the chart that has mostly escaped the downturn.  For corn, the average futures price from April 1-15 was $3.49.  This is an 11% decline from last year at this time and a 13% decline since January.  Soybeans have fared a little better declining by 9% since January.  But the real carnage is shown at the bottom of the table.  Cotton prices have declined 24% since January and 30% since the same period one year ago.  Live cattle also declined 30% in the past year.  The real loser though has been hogs, which are 50% lower than the same time period a year ago and 45% since the start of the year.

The price declines shown in this table are significant and have taken the economic budget outlook for most commodities from roughly break-even to large losses.  For example, the corn and soybean price changes would shave $97 and $58 per acre from the Purdue crop budget estimates for high-quality farmland.  Keep in mind that those budgets were showing a roughly $100 per acre economic loss on a 50/50 corn-soybean rotation before these declines.  The budget situation just went from bad to absolute train-wreck territory.  Given that planting is occurring or just set to begin, it is unlikely that many planting decisions will be altered.  Perhaps a few acres switch back and forth between corn and soybeans and maybe cotton loses a few acres, but overall the die is probably already cast and just getting ready to stop rolling.  In other words, don’t look for big acreage shifts at this point.

To make matters worse, these changes come on the back of 5 years of depressed agricultural prices and incomes.  In short, the economic situation in agriculture is about to get awfully bleak unless something changes. This is in large part why USDA has recently announced that they will inject $19 billion into the farm economy.  It is also likely that the USDA will inject another $14 billion in July when CCC funds are replenished. The USDA’s Economic Research Service estimated that direct government program payments in 2019 were $23.6 billion.  Given these price declines, the amount of money already committed, the amount likely to be added, and payments through the standard government programs, we can expect that the number will be much higher in 2020.

There is still a lot of things that can happen in the course of the next year, and not all of them are bad for farm income.  However, with the prospect of large planted acreages and yields anywhere close to trend, the prospects for a well-supplied/oversupplied market is certainly a possibility.  If such a situation becomes the reality, the prospect for even lower prices certainly hangs in the air.  Overall, it appears that the ultimate economic outcome of the farm sector in 2020 will be heavily dependent upon government payments, be they ad hoc or through the farm bill.

Those of you interested in a more detailed discussion of the overall situation can find it on AEI Premium.

Models Should Come With a Warning Label