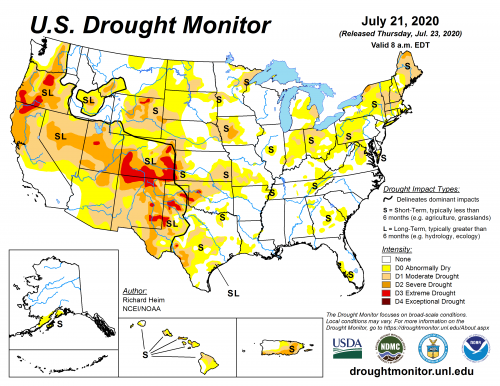 The following is a condensed version of an AEI Premium article, which included a look at soybeans. Not a subscriber yet? You can access the full story – and much more – by starting a free trial here.

The drought monitor maps have been everywhere this year. Flipping through, we can conclude conditions in mid-July are worse than the same time last year but not nearly as bad as 2012. Can we learn more? This week’s post considers recent drought monitor conditions and potential implications for the 2020 U.S. corn crop.

How Big of an Impact?

To provide a bit of context, we took county-level drought monitor data for the second week of July and compared it with county-level corn acreage estimates.

For 2020, an estimated 44% of U.S. corn acres are in dry (30%) or drought (14%) conditions. On the surface, that’s eye-catching. However, keep in mind 28% of acres (14% + 14%) are in dry and drought conditions on average. Along similar lines, we wrote a few years ago about there always being millions of corn acres with low yields. In short, there are always acres in trouble.

What About Yield Implications?

With a large share of the crop in dry/drought conditions, the next question on our minds is, “What are the implications for yields?”

Figure 2 plots the annual estimated share of corn acres in drought conditions against the yield departure from trend. Overall, the trend line slopes down and to the right as we’d expect; more acres in drought, the lower the yield. However, we must be careful with observations like 2012 as it has a huge impact on the slope of that trend line.

Consider 2000, 2005, 2006, and 2007. In these four years, the share of corn acres in drought conditions was more widespread than current levels, but yields came in above-trend. On the other side of the coin, there are also years (2010, 2011) with fewer acres impacted by the drought, but yields came in below trend. In other words, the relationship between drought monitor conditions (and maps) isn’t as clear-cut as we might initially expect.

The first thing to note is how powerful these maps can be at influencing our thinking. However, it is really difficult to consider potential implications.

Overall, dry and drought conditions in 2020 are more widespread than in recent years. We estimated 44% of corn acres are in dry or drought conditions. That said, conditions are nowhere near 2012 levels. Furthermore, dryness – not drought – is the bigger story in 2020.

There are several reasons why the relationship between drought conditions and final yields is tricky. Perhaps the most remarkable is the impact of timely received (or missed) rains.

The goal of this article is to help inform our decision-making process. In this case, the biggest lesson is to exercise caution when thinking about national-level yields as the relationship is less clear-cut than one might expect.