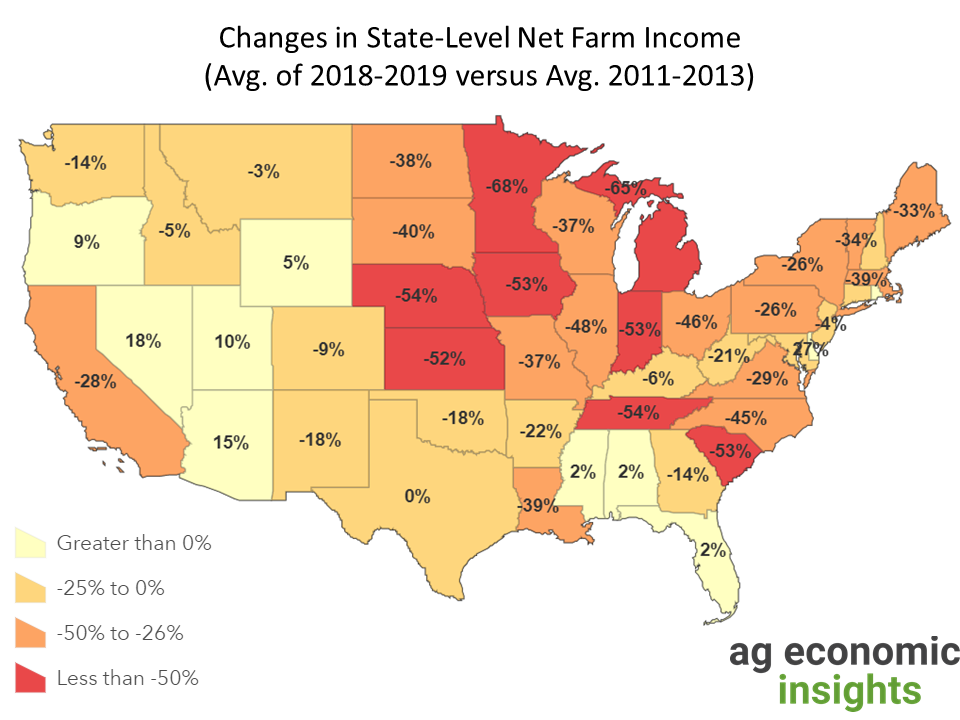 In a recent post summarizing overlooked insights from the latest net farm income data, we noted that commodity and regional variations are important to consider. As part of the USDA’s recent release, state-level estimates through 2019 were included. This week’s post takes a geographical look at state-level net farm income and direct payment trends.

While the sector average change was a 33% decline, the state-level changes have varied from -68% (Minnesota) to +18% (Nevada). Broadly speaking, the Northern Plains and Midwest states have been hardest hit as producers faced the largest contractions in net farm income. In these states, the decline has been larger than the national average.

Outside of the major of corn and soybean producing regions, the state-level income changes have been less severe. In the Southeast, farm income in most states contracted less than the national average. Some states – Alabama, Mississippi, Florida, and several in the West – have experienced higher net farm income recently.

Figure 2 shows direct payments as a share of net farm income at the state level. Specifically, the data are the average for 2018-2019, so one could expect these will be even higher once the 2020 data are released next year.

Direct payments account for a much smaller share of net farm income in the Northeast, West, and – to a degree – Southeast.

The key idea is that nation-wide farm economy data is an aggregation of the conditions individual producers face. While the farm economy has contracted in recent years, the effects have not been uniform across producers. State-level data begin to capture the variation and highlight some of the regional variations.

We often get emails from readers with comments about their observations being different than the national trends – worse or better. These data support those observations as the national data understate the magnitude of the recent contraction in some regions (Northern Plains, Midwest), but overstate the magnitude of contractions in others (Southeast, West).

Similarly, the uptick in direct payments also vary. Direct payments account for a much larger share of net farm income in the Midwest, Plains, and Delta states.

The longer version of this article (here) considers where farm incomes increased during the boom years, how current farm income compares to the early 2000s, and state-level changes in direct farm payments.

PLC and Too Few Bushels