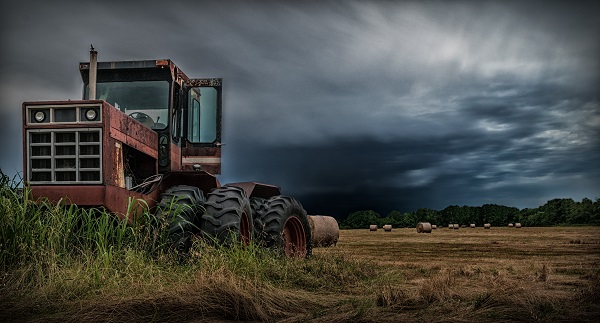 In “Escaping 1980,” we spent considerable time discussing a key element of life in the 1970s and early 1980s, inflation. While this was a macroeconomic condition, it impacted everyday lives and worked its way into the farm economy. This week’s post reviews inflation and its impacts on the farm economy.

While the farm financial crisis and the farm economy bust occurred in the 1980s, challenges with inflation created many headaches throughout the 1970s. During this period, inflation in the U.S. economy exceeded 10% annually on three occasions (1974, 12%; 1979, 13%; 1980, 12%). Furthermore, inflation averaged 7.4% annually during the 1970s (Figure 1). The Rule of 72 would tell us that, on average, prices would have roughly doubled in just ten years. Rapidly changing prices were difficult for individual consumers but also for businesses.

High rates of inflation encouraged behaviors that offered protection from inflation. Many sought out farmland with the expectations of inflation driving valuations higher. The search for an inflation hedge was also fueled by very low real interest rates, making it attractive to leverage farmland purchases.

Inflation’s run eventually came to an end when the Federal Reserve stepped in to curb the run-up. Inflation is ugly, but so was the medicine: higher interest rates. We’ll discuss farm level interest rates in a later post.

In last week’s post, we noted the 1980s farm income story had two elements: fewer dollars of income generated, and each dollar generated having less purchasing power. For example, if you looked at farm income in nominal terms, you’d come to a very different conclusion than considering the more appropriate inflation-adjusted values.

On a more tangible level, consider the implications of inflation on corn prices. Figure 2 shows the average corn price received by farmers in nominal terms. This is the price they would have seen in their records and receipts. The farm income boom of the 1970s started with corn prices soaring (The Great Grain Robbery). In 1971, corn prices were $1.08 per bushel but soared to $3.02 by 1974. What a change! Toward the end of the 70s, nominal corn prices settled back towards $2 per bushel.

Keep in mind that one must always consider more than just a single piece of information. For example, if someone predicted in 1970 that corn prices be higher than $3 per bushel three times in the next 15 years, that would have sounded like an extraordinary situation. However, $3 corn in 1980 and 1983 came after a decade of inflation and a farm economy headed for a financial crisis.

Current macroeconomic conditions are very different than those experienced during the 1970s and 1980s. It is hard to imagine prices roughly doubling in just a decade. For the most recent decade, annual inflation averaged 1.7%, a rate that would double prices in roughly 42 years.

There have been significant concerns about inflation in recent years. Those concerns will likely amplify in the coming years as we fully consider the efforts to stimulate the economy in 2020. However, predicting inflation is challenging and is more complicated than simply the size of the Federal Reserve’s balance sheet.

When considering the 1980s and how bad the farm economy was during this timeframe, inflation plays two roles. First, it was eroding the purchasing power of the limited dollars generated. Second, a decade of rampant inflation led policymakers at the Federal Reserve to dramatically raise interest rates.

Farm Income During the 1980s