Five Macroeconomic Factors to Monitor in 2021 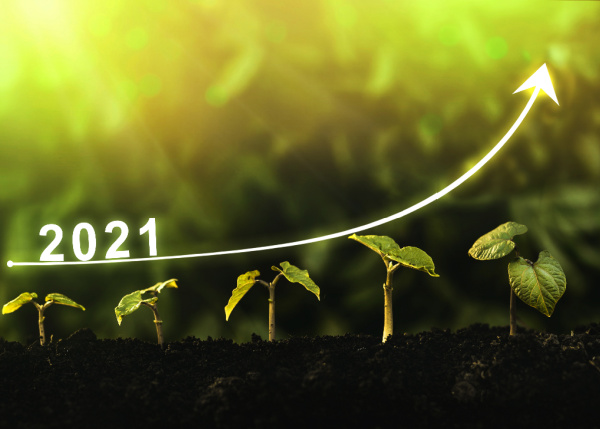 Last spring, we wrote (here and here) about key factors and macroeconomic issues to monitor as the pandemic spread and the economic slowdown began. A year later, we’re following up to write about the key considerations for the economy in 2021 – and the hopes of a recovery.

The primary measure for economic activity – or output – is Gross Domestic Product (GDP). There are a few ways to consider and measure this. Figure 1 shows the aggregate measure of economic activity. At the end of 2019, the economy was humming along at an annualized rate of $21.7 trillion. By the second quarter of 2020, activity contracted to $18.5 trillion annually. The fourth quarter of 2020 recovered to $21.5 trillion but was still below pre-pandemic levels. To clarify, these data are nominal or not adjusted for inflation.

Discussions about the economy often focus on growth. Figure 2 shows the percentage change in real GDP from the same quarter a year ago. Accounting for inflation, the U.S. economy in the fourth quarter of 2020 decreased by -2.4% when compared to Q4 of 2019.

Considering figures 1 and 2 together, it’s important to recognize upfront that economic measures in 2021 may be a bit jarring. For instance, GDP growth in the second quarter of 2021 will likely be significantly higher compared to the lows of Q2 2020. This is to say the economy could still be “recovering” as it returns toward pre-pandemic level, but also posting large numbers.

Looking ahead, all eyes will be on where the economy goes in 2021. Will the economy remain in “recovery” mode, or will there be a bit of an economic surge or boom ahead?

Inflation is on everyone’s mind. In fact, Google searches of the word are up significantly and are approaching the index high.

Figure 2 shows the annual inflation rates, as measured by the consumer price index. The first thing that comes to mind is the wide range of observations. In the last decade, the annual change in the CPI has only exceeded 3% once (2011). However, rates of inflation were regularly near or above 3% throughout the 1990s and 2000s.

While there is much attention on inflation, the commentary is often vague. First, there is always some level of inflation in the economy; the issue is how much. Second, another consideration is the duration of inflation, or how long it persists. Anytime you hear concerns about inflation, you should consider three key elements: How soon, how high, and how long?

Discussion about interest rates generally focuses on the Federal Reserve’s actions. For example, “Will the Fed raise interest rates in 2021?” is a very important question. However, the interest rates market is more than the Fed Funds Rates.

Figure 4 shows the market for various Treasuries. While the 1-year Treasuries have remained low, the longer-term rates have turned higher in recent months. For longer-term loans, such as farmland or homes, the market has begun to price in a yield curve. This is to say, “Interest rates remain low,” and “Interest rates are moving higher,” are both accurate statements, but it depends on the loan terms considered.

In addition to the Fed’s action, Congress has passed several large relief packages. Combined with an economic slowdown, Federal deficit spending as a share of GDP hit 15% in 2020, the highest since World War II. In recent memory, deficit spending approached 10% in 2009.

This is important as it will likely influence government policy in the future. After the Great Recession, the federal government struggled to pass a Farm Bill in 2014 (it had to pass a one-year extension) and implemented programs such as budget sequestration. One has to wonder about how the current realities will play out over the next decade.

One major consideration is how the economy recovers. Will policymakers be dealing with a struggling economy that needs more stimulus or an economy that recovers strongly and rapidly?

(For more on this line of thinking read the AEI Premium bonus article: “When Biederman Pays…”.)

We initially pondered the implications of production shutdowns, as, for example, car manufacturers largely shuttered production in the U.S. to stop the spread of COVID-19. A year later, availability is back on our minds as production challenges linger, but now consumer demand begins to return. For example, semiconductor chips are now in short supply, causing supply chain disruptions for a wide range of consumer goods.

This is significant for two reasons. First, can the buyer get the goods and services needed in a timely manner? Less intuitive, but perhaps more consequential, is how buyers perceive their ability to access the specific good and services they want. There is a big difference between not being able to buy a tractor tire and the perception that the tire you prefer might not be available in the future. These perceptions can be very powerful.

Wrapping it Up – Macroeconomic Challenges in 2021

The macroeconomic challenges of the last year have been significant and unusual. While there are good reasons to hope the worst of the pandemic is behind us, many questions and great uncertainty remain. Have stimulus efforts been enough, just right, or too much? Will vaccinations keep cases low enough to allow a strong return to social activity? While the outlook is improved, the ride will still be bumpy.

Individuals or teams who want to stay up-to-date are invited to access the content and tools at AEI Premium. Specific to this topic, AFN questions about inflation, interest rates, and U.S. gasoline consumption will challenge and sharpen your thinking. While no one has a crystal ball, we can better prepare and improve our own thinking.