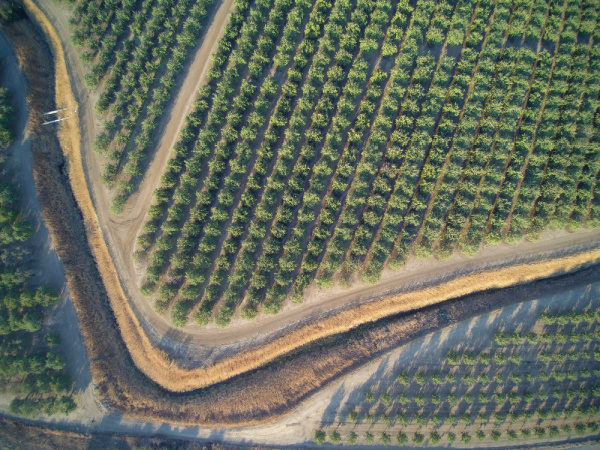 Agricultural production is primarily dominated by rather slow rates of change that persist for many decades.

For example, corn and soybean yields have trended persistently higher over several decades, global soybean production has increased at 4.8% since the 1990s (compared to just 3% for corn), and U.S. wheat acres today are roughly 50% of the peak in 1980 after sustaining four decades of an average annual decline of 1.7%.

While a helpful Rule of Thumb, there are occasional exceptions that are worth diving into when we come across them. This week’s post considers the trends in the consumption and production of almonds, along with lessons and considerations that can be applied broadly.

Today, almonds are the most consumed tree nut. That said, we should note the U.S. consumes considerably more peanuts (7.53 pounds per capita in 2018), which are technically legumes.

There is another consideration we can learn from the peanut. While the USDA data doesn’t provide insights into how exactly Americans are consuming almonds – as a snack, beverage, etc. – we do know the majority of peanut consumption (4.12 pounds, or 55% of total) is in the form of peanut butter. In fact, Americans eat about as many peanuts in the form of peanut candy (1.17 pounds) as they do as peanut snacks (1.43 pounds). This is all to say the uptick in almond consumption is likely driven by several consumer trends.

However, the bigger almond usage story is in exports (Figure 2). Net exports, or the difference between almond exports and imports, have increased from 500 million pounds in 2000 to more than 1.5 billion pounds in 2019/20.

When considering net exports relative to production (in green), we can see that net exports have always been a large market. In recent years, this has accounted for more than 60% of production, or a majority of usage, as the almond market roughly breaks down to 1/3 going toward domestic consumption, and 2/3 to trade.

Furthermore, the growth in almond usage since 2000 has also been at the 1/3, 2/3 split. So, while the U.S. consumer has increased almond consumption, so has global trade.

After decades of roughly 400,000 acres of almonds in the U.S., production expanded in the late 1990s to nearly 1.2 million acres, all located in California. Furthermore, the acreage expansion may have even more steam as the 2017 Census of Agriculture reported more than 200,000 acres of nonbearing-aged almonds in production, compared to 118,000 acres in 2012. The upcoming 2021 crop is estimated to be the largest on record.

Wrapping it Up – Lessons Learned from U.S. Almond Production Trends

Both almond production and consumption have shifted substantially over the last twenty years. After a few decades of consistent per capita consumption, net exports, acreage, and prices, all these factors have trended upward since 2000.

There are several considerations and lessons we can learn from almonds. First, almonds have a long production cycle. Simply put, the decision to expand production takes several years to realize as it takes years for the tree to reach nut-bearing status. This is also a consideration in other forms of agricultural production, such as dairy or cow/calf production.

Second, once those investments are made, acreage doesn’t significantly vary as prices fall. This is largely due to significant, upfront investments to establish the crop. Once the trees are established, they remain in production for several years – even during times of low prices – as the annual, variable costs are considerably less. This can create significant challenges if production becomes excessive and burdensome.

Third, the demand story in almonds is attributed to several different elements. Both net exports and domestic consumption have increased in recent years. Furthermore, consumption at the consumer level has likely been driven by almonds being included in more products. This is all to say that stories of strong demand often require several components and not just a single factor.

Finally, large growth rates are often possible when starting at small numbers. This is to say that while acreage, net exports, and per capita consumption have more than tripled in the last 20 or 25 years, the starting points were relatively small. For example: At 2.4 pounds/year, current per capita almond consumption may be the most of all tree nuts, but is still well behind peanut consumption (7.1 pounds annually). Furthermore, the increase from 400,000 acres to nearly 1.2 million is also relatively small. For context, the U.S. planted 5.8 million acres of sorghum in 2020. This is to say doubling production at that scale is more doable than at, say, wheat or soybeans’ acreage.

Looking ahead, the story of almonds is likely applicable to some of the alternative proteins making headlines in recent years. A lot will have to go right on the usage side to obtain high rates of growth, and that growth will start from small numbers. The real question is how long such strong growth rates can be sustained, especially as the scale becomes significant.

China's Impact on Global Agriculture in 12…