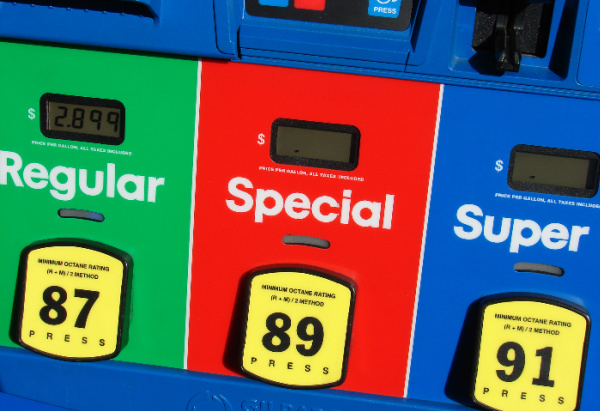 One of our goals from the Corn Saves America season of the AEI.ag Presents podcast was to highlight how even the best of plans can run into troubles when reality doesn’t play out as anticipated. For ethanol, one of the biggest opportunities quietly but quickly became a source of pain: gasoline consumption.

Figure 1 shows annual U.S. gasoline consumption since 1949. The data shown in orange are the observations before 2005 of how the world looked as policymakers were debating and writing the Renewable Fuels Standard (RFS). The trend line in 2005 (dotted line) showed U.S. gasoline consumption increased at a rate of 1.72 billion gallons every year. Furthermore, the trend line captured a majority of the variability in the data over time (the r-squared is 0.95).

A simple extrapolation of the trend line – which had worked really well for six-decades, suggested gasoline consumption by 2019 would exceed 165 billion gallons per year. When you combine these data with the background of that era – two wars in the Middle East, high energy prices holding the U.S. economy back, and concerns about “peak oil”- it helps us understand why alternative sources of fuel were so desirable.

The data in blue, however, show how reality played out. Gasoline consumption in 2019 – prior to pandemic-related issues – was 142 billion gallons. This is roughly 86% of what the 2005 trend-line analysis would suggest. Furthermore, gasoline usage in 2019 was only 1.3% higher than the 2005 level. In short, gasoline consumption – which had six decades of upward trends – has moved mostly sideways over the last 15 or so years.

Just as legislation was passed to incentivize and mandate corn-based ethanol as a new source of fuel to help meet the country’s growing oil and gasoline challenges, the world shifted. In addition to ethanol policies, fuel efficiency standards were ratcheted higher, the technology for shale oil and fracking came into existence, electric vehicles went from a Sci-Fi dream to reality. While each of these events had a different impact, they all contributed – in some manner – to solving the energy and fuel challenges that seemed insurmountable just fifteen or so years ago.

My grandmother always had a rule about her apple pies: “whoever cuts the pie picks their slice last.” This rule wasn’t ever a problem when there was plenty of pie, but for the last few slices, it became a very binding and motivating rule.

In 2005, the future of gasoline consumption seemed like an ever-growing pie, and ethanol getting a “slice” of that market didn’t seem that problematic or burdensome. But today, the RFS and ethanol mandates are currently being implemented in a world where gasoline consumption hasn’t grown very much, and now  the fight for every slice – today and into the future – has higher stakes.

There are at least two key lessons to consider.

First, ethanol and the RFS set out to tackle a set of problems that didn’t materialize as expected or predicted. On the one hand, the worst-case scenarios were avoided. On the other hand, refiners and ethanol producers look at the world in 2021 and have very different ideas for how the RFS should be implemented.

The second lesson is how challenging it is for policymakers to design and deploy a policy that 1) is binding and motivates painful shifts in behavior, but 2) is also resilient and flexible should the world shift in an unexpected way. For ethanol, there have been two big shifts for regulators to navigate; the long-run trend and shocks like 2020. Even the best-designed and best-intended policies can struggle while navigating reality as it plays out years and decades after the fact.

There are many lessons from the rise of ethanol that are important to review and consider. In the latest season of the AEI.ag Presents podcast series, we discussed lessons learned from ethanol and the RFS and considered the potential implication for carbon and carbon markets in the U.S. We invite you to take a listen. Corn Saves America is available where you listen to podcasts, or can be streamed on the aei.ag website.

Farmland Values and Cash Rents in 2021

How to Avoid Survivorship Bias