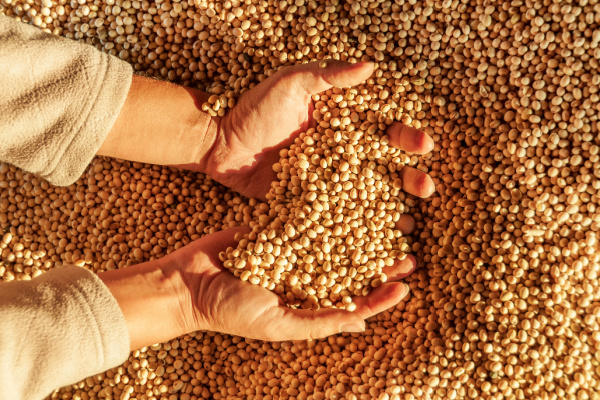 To capture how difficult it can be to compare yield over time, consider the following:

While these posted yields are only a 0.5 bushel apart and could be easily grouped together as “similar” outcomes, the departure from the trendline measure reveals they are actually quite different. The 0.5-bushel difference across just a few years can be misleading.

Figure 1 plots the annual U.S. average soybean yield and the trendline since 1988. Over this timeframe, U.S. soybean yields have increased at an average annual rate of 0.56 bushels per acre per year. This is a slow but persistent rate of change. That means you likely aren’t going to update your farm-level yield expectation from year to year, but over several years – or decades – the implications dramatically accumulate.

For 2022, the trendline yield is 50.9 bushels per acre. Relative to yields in recent years, the 2022 trend yield might seem low. For context, yields in 2020 (51.0) and 2021 (51.4) might give the trend yield the perception of being easy to obtain. This is nearly the opposite of what we observed with corn, where the trend yield is above recent record-high yields.

The USDA’s initial soybean yield projection – and the line for the AFN questions – is 51.5 bushels per acre.

2) A Run of Good Soybean Yields?

You don’t have to stare at Figure 1 very long to notice yield how common above-trend yields have been in recent years. Since 2014, soybean yields have slipped below the trendline only once, in 2019. Furthermore, yields in 2016 (+4.4) and 2018 (+2.0) are in the top five departures from trend yields.

Some will be tempted to jump to the conclusion that a below-trend soybean yield might be “due.” But the most significant implication is that our thinking of soybean yields – what’s normal or the range of outcomes – might be affected (or biased) by the recent run of above-trend yields. This can also affect our expectations about farm-level yields.

If we know the trendline yield for 2022 and the annual departure from the trend, we can frame some expectations about potential outcomes in 2022 (Table 1).

It’s common to hear concerns or comparisons to 2012 as the drier, warmer weather of June and July inevitably creeps in. That was a disastrous year for many producers, but it’s worth keeping in mind that 2012 wasn’t as bad for soybeans as it was for corn.

While we previously commented that several of the yields in recent years have been above the trendline, it’s worth mentioning an extreme soybean yield hasn’t been observed in nearly two decades. The high and low watermarks for corn yields occurred in 2004 and 2012, but soybeans’ extremes were in 2003 (-6.3) and 1994 (+6.2).

In short, the relationship between corn and soybean yields has a strong, positive correlation, but they aren’t exactly the same.

On April 15th, the first four questions of the 2022 Yield Forecast Challenge opened. Relevant to this article is the question: “What’s the probability of the November WASDE estimating the 2022 U.S. soybean yields above 51.5 bushels per acre?”

As a starting point, an initial forecast of 50% is what the base rate would suggest. However, carefully consider how you might update your forecast over time. Recording your initial forecast and spending a few minutes thinking about when and the types of information you use to update your forecast in the future can help you be more planned – and less reactionary – to the torrent of tweets, breaking news, and forecast maps that are inevitable.

Furthermore, content like AEI Premium’s Corn and Soybean Yield Guides helps you think carefully about updating your expectations. For instance, a majority of yields are within +/- 2.0 bushels of the trendline (79% of observations).

In conclusion, there is a lot of uncertainty about the 2022 growing season, and the stakes are high. We hope you join the Yield Forecast Challenge. While the contest is fun, you’ll also gain new tools to help you think about, communicate, and make decisions through uncertainty.

Three Insights from the 2022 Corn Yield…