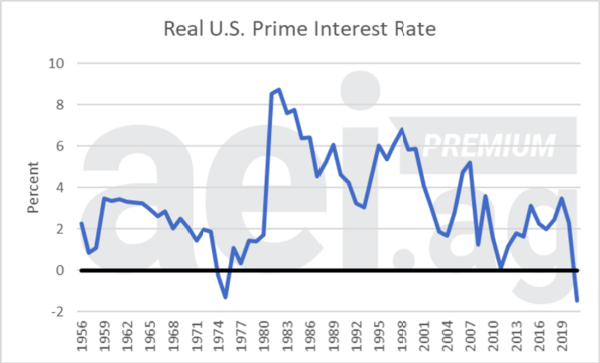 These days, you don’t have to go very far to find an article or chart about the current interest rate situation. While the topic is admittedly noisy, we have two important ideas to share that haven’t gotten much attention. This week’s post reviews real (inflation-adjusted) interest rates and the magnitude of historic rate changes.

A feature of the farm economy in the 1970s was very low – and sometimes negative – real interest rates. On the surface, adjusted interest rates for inflation seem complicated, but it’s simply the difference between the rate of interest paid (or nominal rate) and the annual rate of inflation.

As we discussed in Escaping 1980, low and negative real interest rates are sometimes mentioned as part of the enthusiasm in the farm debt and real estate markets in the late 1970s, which didn’t play out well during the 1980s. In short, some viewed negative real interest rates as a reason to “load up on debt,” as inflation outpacing the cost of capital made future debt obligations seem easy to satisfy.

The main idea here is that the combination of low interest rates and high inflation set the stage for low and negative real interest rates. This could have a significant effect on how some view future purchase and financing decisions.

Looking ahead, it’s hard to imagine negative real interest rates persisting – especially at the bank or individual level – for multiple years. A combination of factors – higher nominal interest rate and/or lower inflation rates – will likely push real rates higher in the future. That said, it’s hard to predict how or when this situation might evolve.

Attention has been hyper-focused on the Fed’s next decision and the range of possible rate hikes. So far, the Fed raised the upper limit of the Fed Funds target rate by a total of 75 basis points, and the range of future hikes has spanned from 25 to 75 basis points. This got us wondering about what historic interest rate adjustments have looked like.

Figure 2 shows the change in the effective Fed Funds rate over the previous twelve months. The data are a bit lagged for 2022, but you can clearly tell that the current 75 basis points of change are, historically speaking, rather small.

However, it’s the interest rate volatility of the 1970s and 1980s that really captures one’s attention. While the 1980s are infamous for high interest rates (farm rates peaked at more than 18%), an overlooked feature is the frequency and magnitude of adjustments made by the Fed during this period.

Although not shown in the chart, there were also very large monthly changes. The largest swings occurred in 1980. In March of that year, the Fed increased the Funds Rate by 300 basis points. In April, another 40 basis points were added. Reversing course, the Fed lowered then short-term rates by more than 650 basis points in May. While those changes were extreme, they illustrate just how different today’s environment is in comparison.

Finally, Figure 2 also illustrates how stable the Fed Funds rates have been in the last decade. In addition to growing accustomed to low interest rates, the last decade has also affected our expectations around the risks and range of expectations about possible rate hikes.

With interest rates heading higher, it will be important to monitor the relationship between the rates folks are paying and the broader inflation situation. For the first time in nearly fifty years, real interest rates turned negative in 2021. It’s unclear how long extremely low real interest rates will persist – or how they end – but it’s worth considering how the current situation might affect perception about using and repaying future debt.

Second, there were many headlines about the Fed’s recent 50 basis point hike and how large it seemed. There have been countless comparisons to the 1970s and 1980s, but, in many ways, conditions are still very tame compared to those two decades. It’s one thing to say conditions are unfamiliar to anything we’ve observed since the 1980s, but it’s completely different to conclude we’re repeating that period of history.

The above charts are part of two AEI Premium articles posted earlier this year, which you can read in entirety here and here.

Also, check out these popular and related articles:

Lastly, those looking to challenge their thinking and learn from others should check out the AFN questions related to 1) Fed rate hikes in 2022 and 2) changes in long-term rates.

If you aren’t an AEI Premium subscriber yet, learn more about what your bosses, colleagues, and peers have access to by starting a free trial or contacting our team today.

The Perils of More Data