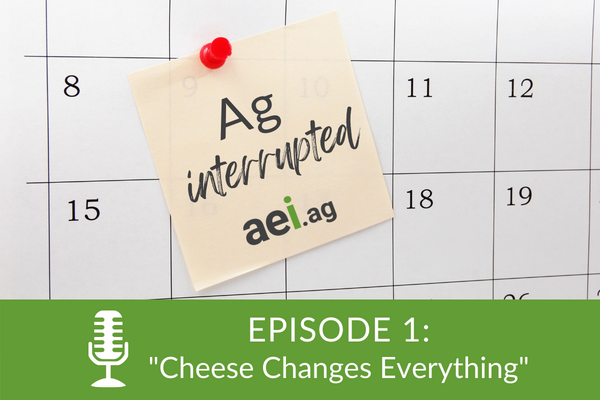 These days, we order cheese on everything, from pizzas to burgers, tacos, and chicken sandwiches. But that wasn’t always the case. This week, we’re exploring the intersection of agriculture, history, and economics to take you back to a specific date and unpack how chaotic, unsettled, and flat-out bizarre history can be.

Read this post, and then listen to the first episode of AEI.ag’s new podcast series, which focuses on the surprisingly fascinating history of cheese production and consumption trends.

On June 29, 1956, President Dwight Eisenhower signed the National Interstate and Defense Highway Act into law. While the legislation launched what we now know as the interstate system, the implication of this infrastructure bill was far-reaching. Within agriculture and specifically the dairy industry, it kicked off a change in how U.S. consumers traveled and ate.

In the first episode of the new podcast series Ag Interrupted, the AEI.ag team – Sarah Mock, Brent Gloy, and David Widmar – dive deep into the history of cheese, interstates, and the U.S. dairy industry with guest Dr. Andrew Novakovic. Whether you are in the dairy sector, a fan of cheese, or just curious about agriculture, economics, and history, we think you’ll enjoy the inaugural episode.

Agriculture is largely dominated by slow rates of change that play out over decades or entire generations. Annual growth rates like 2.8% and 3.5% may seem essentially the same, but the compounding effects over decades create vast differences.

However, as discussed in the episode, it hasn’t been all good news for the dairy sector over the last six decades. Dr. Novakovic summarized it as a “miracle wrapped in a tragedy.” U.S. dairy production has increased, outpacing population growth and resulting in heavy consolidation and fewer dairy farms.