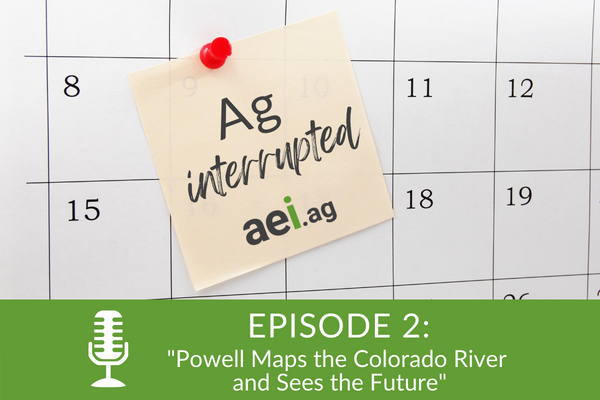 The Anniversary of 1869 Powell Expedition

As Mark Twain may or may not have famously said, “Whiskey is for drinking; water is for fighting over.”

This week, we’re exploring the intersection of agriculture, history, and economics to take you back to a specific date and unpack a moment in history that envisioned a world where that now-ubiquitous quote wasn’t true.

On August 13, 1869, John Wesley Powell reached the foot of the Grand Canyon. Powell was the first American to put in at the headwaters of the Colorado River in Wyoming and travel it all the way to its terminus. This journey would ultimately shape the way that we understand the West’s water resources.

In the second episode of the Ag Interrupted podcast series, the AEI.ag team — Sarah Mock, Brent Gloy, and David Widmar — dive deep into Powell’s vision and how it is, and isn’t, reflected in water policy today. Whether you live and work in the West or are just curious about agriculture, economics, and history, we think you’ll learn something new from this episode.

During his voyage 153 years ago, Powell spent time evaluating the landscape and resources with an eye to how Americans might make economic use of it all. One of Powell’s most powerful observations was that the western United States is an incredibly water-scarce place. Even then, he foresaw a need to set up a governing system to help the region avoid conflict over water.

He proposed a Western Watershed map that would have looked like this:

Powell’s vision would have resulted in the West being fragmented into dozens of states that would be able to negotiate for water without state lines getting in the way. If watersheds were broken apart, Powell feared, negotiation would not — could not — occur with a state border in the way.

Despite advocacy and activism by Powell for the rest of his life, this map obviously did not become reality. But it was a real possibility, at least for a little while. Powell’s map wasn’t discarded because it didn’t make sense for agriculture, or for the people who inhabited the region. So what happened? Listen to the episode to find out!

Today, the question of the shape of Western states has been decided. That debate is closed. However, the ecological realities persist, despite the state boundaries that we have created.

The case of water in the West offers some incredibly valuable insight into some possible futures for U.S. agriculture. Short-term problems might require short-term solutions, but this is not one, and will likely require a much longer-term fix.

Special thanks to guests Greg MacNamee and William deBuys for sharing their insights during this episode.

China on Pace for Another Year of…

Three Ways to Measure the Impact of…